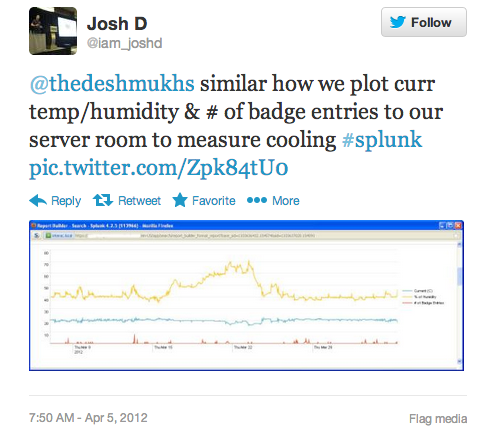 Continuing on with my goal for 2013 of writing more blog posts I figured I’d go back and look at a neat use I found for Splunk and two kinds of data I was able to ingest in to it.

As Splunk has grown in popularity over the last year I started see more and more blog posts, twitter comments, etc regarding various uses for Splunk and most of the time I look over at my own dashboards and see items I’ve had in place for a long time being described.

Recently I came across a blog post from early January on Splunk’s own blog site entitle “Making Applied Math Interesting” which does a good job detailing how to use Splunk to examine time series temperature data. Reading this is made me initially think of a report I wrote that does exactly that but then added another layer of data….the human element.

I think my tweet from almost a year ago now pretty simply sums it up:

And here’s a better close up on the chart itself…

If you still haven’t figured it out… Two data sources come in to play here:

Obviously there’s many other uses for this data and a number of reports that can be pulled out but for now I thought I’d share this.